New mum Rihanna’s nesting instinct has definitely kicked in – she’s planning to bring up her baby in her home country of Barbados.

The singing superstar, 34, who gave birth last week, is expected to stay in Los Angeles for three months before moving to the Caribbean isle with her son and his rapper dad, ASAP Rocky, 33.

A source told the Sunday Mirror: “ Rihanna loves Barbados and she loved growing up there.

“She wants to give her baby the same experience she had – away from the world of showbusiness.

“Both her and ASAP’s family are in Barbados, so the couple are planning to move there in a few months’ time.”

And it is understood she has already decided which school the tot will go to when he’s old enough.

The What’s My Name singer has not yet revealed the lad’s name.

But he has definitely been born with a silver spoon in his mouth, thanks to his mum’s mega 2.13 billion fortune, which trumps dad’s 9.42 million.

Rihanna – who has had more than 40 top 40 UK hits, including eight No.1s, and has launched make-up and lingerie lines – was raised in a bungalow in Barbados’ capital, Bridgetown.

But her son can expect rather more luxurious surroundings.

In 2013, Rihanna bought a 21.47 million penthouse in one of the island’s most prestigious roads, Sandy Lane.

Staff there include a chauffeur, a 24-hour concierge, a gardener and a private chef.

The baby even looks set to have a VIP godmother. 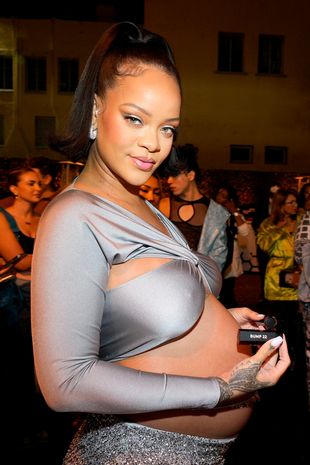 Pregnant Rihanna pictured at the launch of Fenty Beauty at ULTA Beauty in Los Angeles in March ( Image: Getty Images for Fenty Beauty by Rihanna)

DAVE CHAPPELLE AND BUSTA RHYMES TO CO-HEADLINE THE...