Will Smith and wife Jada could have ‘one of the ugliest divorces in showbiz history’ after tensions grow between the pair following the actor’s controversial behaviour at the Oscars last month.

The 53-year-old actor was banned from the Academy Awards for 10 years, after storming the stage and slapping host Chris Rock across the face.

His outburst came after Chris joked to Will’s actress wife Jada Pinkett Smith that he couldn’t wait to see her in GI Jane 2, referencing how Demi Moore famously shaved her head for the role.

But Jada, who has alopecia and shaved her hair off after it started to fall out, looked visibly upset as she rolled her eyes and her face dropped.

Will suddenly stormed the stage and slapped Chris before returning to his seat and yelling: “Keep my wife’s name out your f***ing mouth.”

Public opinion was divided over what happened but it now appears that tensions are high between the couple behind closed doors. 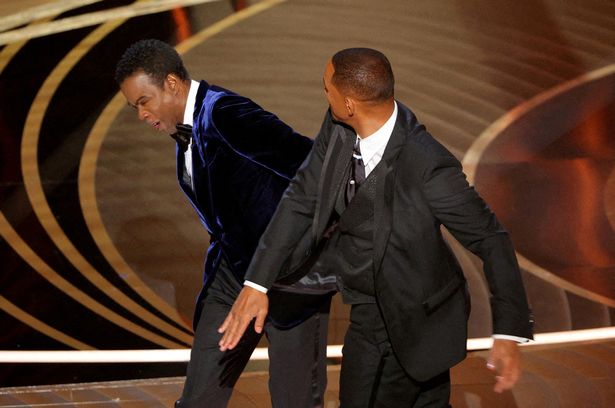 “Ever since the Oscars scandal, tensions between them have been palpable,” an insider told Heat Magazine.

“There have been problems for years, but they’re barely speaking right now. If they were to split, Will has a fortune of $350million that Jada would be entitled to half of under Californian law.

“It could be one of the ugliest divorces in in showbiz history and drag on longer than Angelina’s and Brad’s did.

“Will obviously doesn’t want that, but there is only so much he can take,” the insider added.

The actor apologised to the Academy and his fellow nominees when he collected his prize, and later issued a grovelling public apology to Chris.

He penned: “Violence in all of its forms is poisonous and destructive. My behavior at last night’s Academy Awards was unacceptable and inexcusable.

“Jokes at my expense are a part of the job, but a joke about Jada’s medical condition was too much for me to bear and I reacted emotionally.

“I would like to publicly apologize to you, Chris. I was out of line and I was wrong. I am embarrassed and my actions were not indicative of the man I want to be. There is no place for violence in a world of love and kindness.”

He added: “I would also like to apologize to the Academy, the producers of the show, all the attendees and everyone watching around the world.

“I would like to apologize to the Williams Family and my King Richard Family. I deeply regret that my behavior has stained what has been an otherwise gorgeous journey for all of us.

“I am a work in progress. Sincerely, Will.