Bill Gates is largest owner of private farmland in U.S., with acreage across 18 states

A new report on the largest holders of private farmland in the United States reveals that Bill and Melinda Gates are atop the list, with the billionaire Seattle couple amassing 242,000 acres of land.

According to The Land Report, the Microsoft co-founder owns farmland across 18 states, with the largest holdings being in Louisiana (69,071 acres), Arkansas (47,927 acres) and Nebraska (20,588 acres). Gates also owns a stake in more than 24,800 acres of transitional land outside of Phoenix.

A Tri-City Herald report on the 2018 purchase of 14,500 acres of farmland in Benton County, Wash. — for a staggering $171 million — is what set The Land Report and editor Eric O’Keefe digging further into Gates’ holdings.

A spokesman for Cascade Investment declined to comment to The Land Report on any of the details associated with the transactions or Gates’ holdings, other than to say that Cascade is very supportive of sustainable farming. 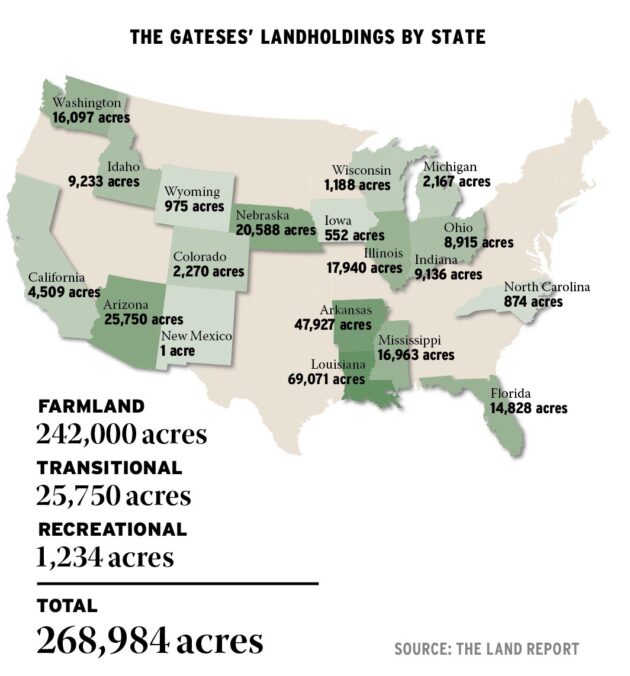 The Bill & Melinda Gates Foundation launched a new nonprofit group a year ago focused on providing small-scale farmers in developing countries with the tools and innovations they’ll need to deal with the effects of climate change. Bill & Melinda Gates Agricultural Innovations, or Gates Ag One for short, is headquartered in the greater St. Louis metropolitan area and is focused on smallholder farmers in sub-Saharan Africa and South Asia.

Gates’ interest in sustainability also extends to his investment in Impossible Foods, which makes “meat” from plants.

Gates is currently No. 3 on the Bloomberg Billionaires Index with a net worth of $132 billion.

Forbes pointed out in its report on Gates’ farmland holdings that he doesn’t even make The Land Report’s top 100 when it comes to individual owners of land. That list is toped by Liberty Media’s John Malone, with 2.2 million acres of ranches and forests. Amazon CEO Jeff Bezos makes that list at No. 25 with 420,000 acres, mainly in West Texas where he’s busy launching spacecraft for Blue Origin.

Dr. Dre back in the studio just a day after release from hospital for brain aneurysm

‘Godzilla Vs. Kong’ Jumps Up To March In HBO Max & Theatrical Debut